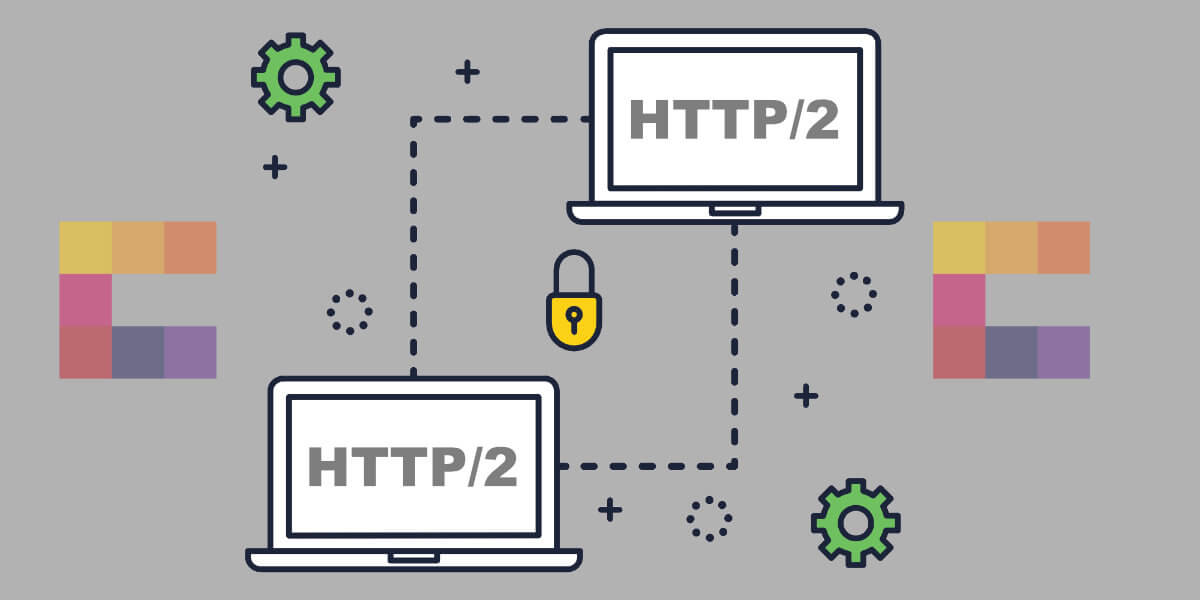 The Internet, as we all know it today, wouldn’t have existed without the HTTP protocol. It's what pumps content to all of us. It makes it possible for us to read the latest news, order stuff online, watch videos on YouTube and get to our favourite websites on all types of devices. Sadly, the protocol has not been changed since 1999 when version 1.1 was released so, when HTTP/2 was released in 2016, it was a source of excitement for us.

Of course, ConCom WebDesign has researched HTTP/2 thoroughly and are happy to inform you that all our cloud web hostings support HTTP/2.

In fact, since we first wrote this article, we have moved to make sure all of our managed websites all use an SSL certificate and make use of HTTP/2

Why HTTP needed an update?

Modern websites/apps make hundreds of HTTP requests and HTTP 1.1 is not well designed for the performance needs of the modern web and the constantly growing requirements of the users. During the last 20 years, many new technologies emerged and us web developers got really creative in terms of going around and jumping over the limitations of HTTP 1.1. However, it was time for the protocol itself to change and introduce some new features that will speed up all sites on the Internet.

HTTP/2 is based on SPDY and is focused on performance improvements. It offers the following enhancements:

Modern websites/apps require web browsers to make many requests to render a web page. In the beginning, HTTP/1.0 allowed only one request to be made via a single TCP connection. With HTTP/1.1 this was addressed so browsers can make multiple requests to load many resources simultaneously. Unfortunately, another problem called head-of-line blocking was not resolved.

When HTTP/1.1 is used the requests flow is usually the following: the browser sends a request and needs to wait for the response of the server in order to send the next request. Modern websites have over 100 objects and even when browsers use multiple connections this way of handling requests can add up a lot of time because of head-of-line blocking.

The solution introduced in HTTP/2 is called multiplexing. It gives us a simple way to request and receive multiple web objects at a time through a single connection. It is the solution for the head-of-line blocking problem. HTTP/2 resolves this problem by using frames. Every frame contains meta-information about requests/responses which allows one connection to be used for simultaneous delivery without causing confusion about which response is associated with which request. Here is an example of how HTTP/2 handles the same three requests that we showed in the previous diagram: 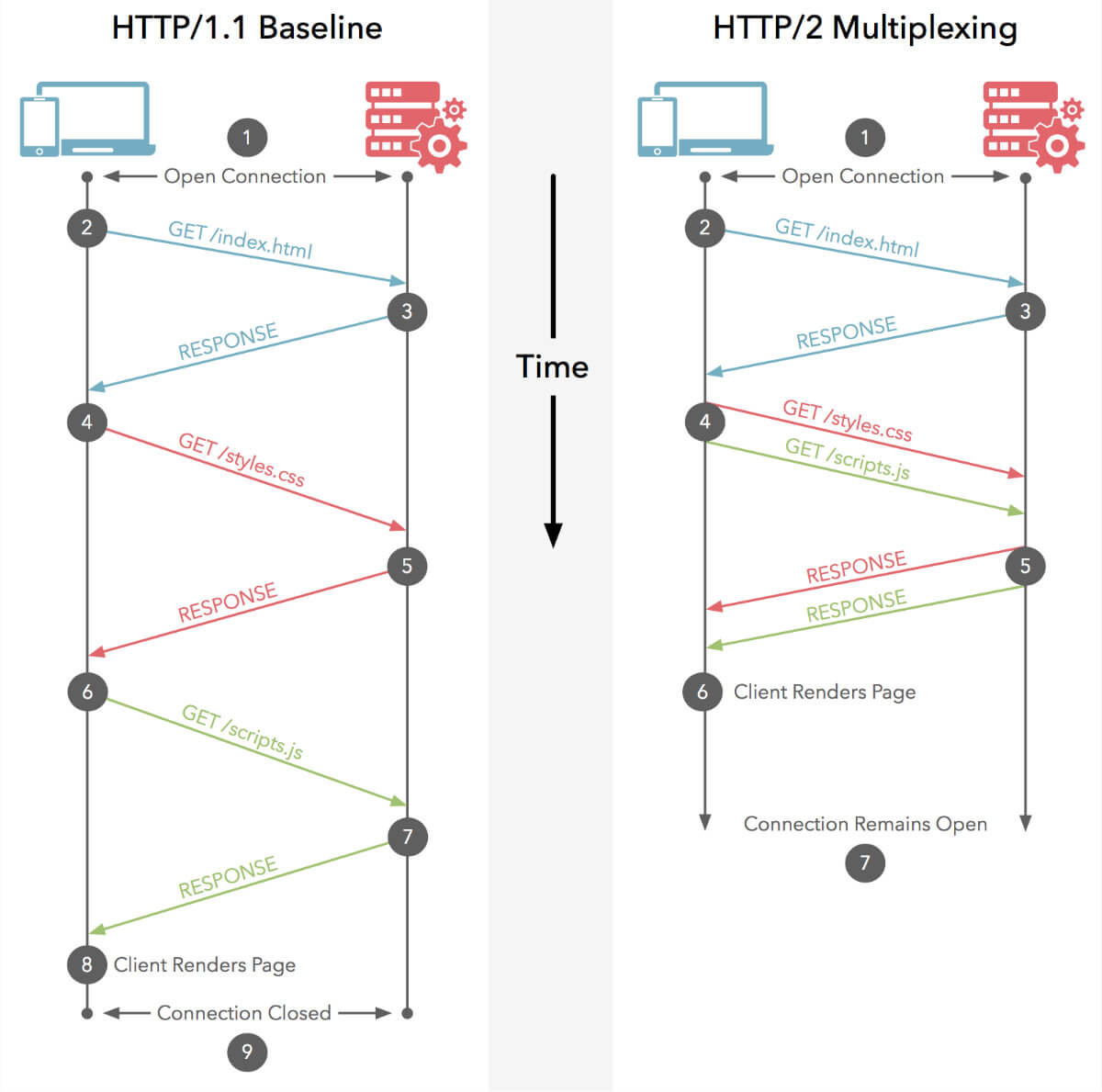 As you can see from the second diagram when HTTP/2 is used the user sends multiple requests and can receive them in whatever order. Thus, pages load faster. For example, the server needed more time to handle the second request but the delivery of the third object was not blocked.

The second big improvement added by HTTP/2 is related to HTTP headers. Clients use headers to inform servers what information is needed and in what format the information could be delivered to them. For example, a web browser usually sends headers to inform the servers that it supports gzip compressed data. Cookies are also communicated via headers and the size of some cookies can get really big.

The problem is headers do not change much between requests. Also, with HTTP/1.1 headers have to be provided for every single request, which of course is pointless when headers do not change. Now HTTP/2 not only sends headers per connection, but it also offers compression. This means that an average web page that contains ~80-90 objects can now be loaded much faster because the web browser will need just one round trip to send all of the headers for all of the objects.

The third problem which HTTP/2 solves is caused by multiplexing and headers compression. Some objects are more important than others. For example, the CSS objects for a site should be delivered in the beginning, so that the site could be properly displayed. If multiplexing is used you cannot be sure that the CSS will be delivered before the rest of the objects.

The designers of the protocol decided to address this issue in the protocol itself. Clients are able to communicate with the server and indicate priorities for certain objects and this way the web servers can make decisions about which objects should be delivered first to the clients. Since the protocol itself supports prioritization this means that web developers should not worry about changes that need to be made to their apps. The modern web browsers will take care of prioritization and handling of data streams in HTTP/2.

All web server implementations support HTTP/2 when it is used over an encrypted connection. This means you need an SSL for your website in order to take advantage of HTTP/2.

You can find more about HTTP/2 here: https://http2.github.io/faq/

Is HTTP/2 already in use?

HTTP/2 has been around for a few years now and you have probably already used it, especially if you’re using a modern browser such as all of the latest versions of Chrome, Firefox, Opera and Edge support HTTP/2.

All new (and nearly all of our current) websites created by ConCom Webdesign, if hosted and managed by us, will have a 'Lets Encrypt' SSL certificate installed, which allows the server to use HTTP/2. Also, we use CDN services that fully make use of HTTP/2

If you're unsure if your website is making use of HTTP/2, or you know it isn't, because you don't have an SSL certificate installed, then please contact us for a web hosting quote.
We can help migrate your website to a fast, secure, UK based, PCI compliant host that uses HTTP/2. Making your website faster, more secure and more user-friendly.

Companies we have worked with

Concom Website Design's mission is to provide you with an affordable, mobile-friendly and easy to use website that meets all of your needs and helps your business grow.

A Full-Service Digital Agency, specialising in Joomla! Websites, Marketing, Security, IT, Advice, Joomla Training and on or offsite Consultancy.

We look forward to hearing from you to discuss any new web projects, Joomla Training or website consultancy.

Feel free to call into our excellent coworking offices in Altrincham & Warrington to discuss anything over a coffee too.